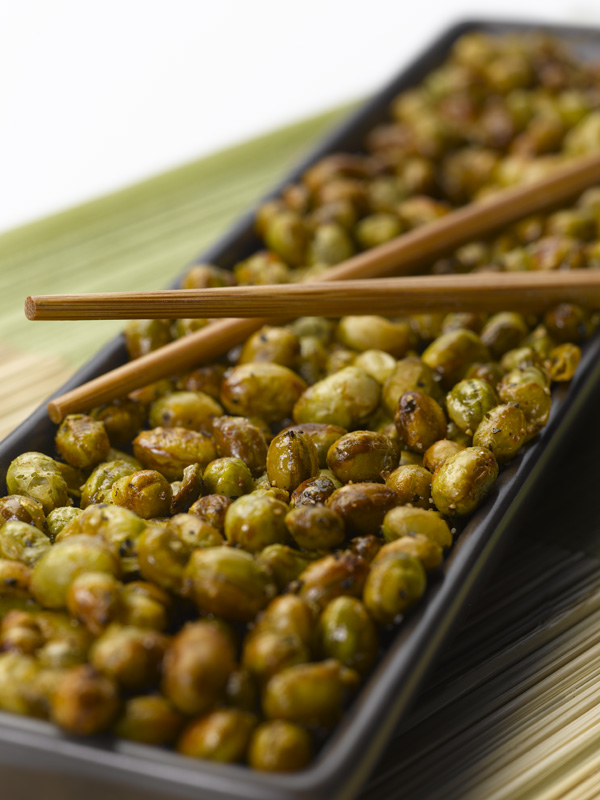 16 ounces frozen shelled edamame
2 teaspoons extra-virgin olive oil
1 teaspoon sea salt
1/2 teaspoon freshly-cracked black pepper  (or 1-2 teaspoons alternate seasoning)
If you have time, thaw the edamame for an hour or so in a strainer over a bowl (to catch the melting liquid) before baking. This will reduce the roasting time.

Pour the edamame in a strainer and run under warm water for a few seconds to melt any ice crystals. Spread the edamame on a clean dish towel and pat gently with another dish towel to dry them as much as possible.

In a mixing bowl, toss the edamame with the olive oil, salt, and pepper (or other seasonings). Taste one of the edamame and add more seasonings if desired.

Spread the edamame in a single layer on a sheet pan and roast for 30-40 minutes. Stir every 10 minutes and watch for the edamame to begin puffing and turning golden-brown and crunchy. Their color will also darken, the exterior will be dry, and you’ll hear them “singing” as steam escapes from inside the bean.

Remove the pan from the oven and transfer the roasted edamame to a serving bowl. They are best if eaten within a few hours of roasting.